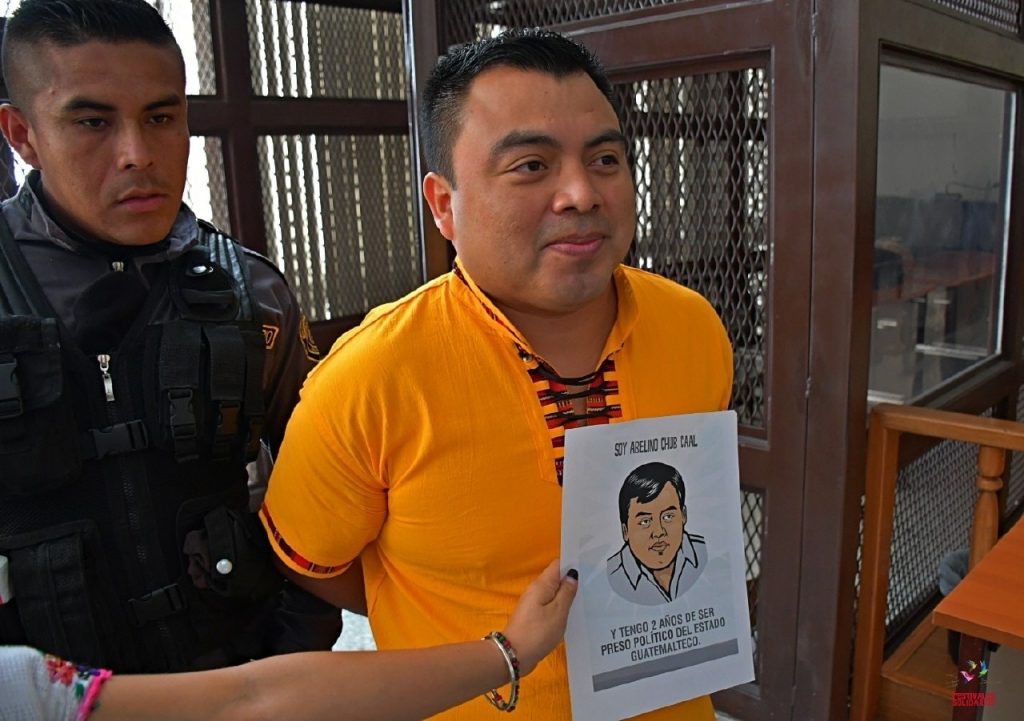 The Guatemalan government, through the Public Prosecutor’s Office, insists on continuing to criminalize Abelino Chub Caal, in the context of land dispossession suffered by the Q’eqchi community of Plan Grande in El Estor, Izabal.

Abelino Chub, an indigenous land rights advocate, spent 813 days unjustly imprisoned previous to his trial, falsely accused of aggravated usurpation, arson, and illicit association. He was finally released on April 22, 2019 after the High-Risk Court A issued an exculpatory sentence, finding him innocent of all charges.

However, the Public Prosecutor’s Office has—inconceivably—decided to file an appeal against the sentence. On February 24, 2021, the Criminal Court of Appeals held a special appeal hearing. Defense attorney Jovita Tzul presented her arguments and Abelino Chub voiced his dismay at the appeal, asking the Court to uphold the sentence in his favor.

The Public Prosecutor’s Office did not even appear at the hearing, opting instead to send its allegations via written form. The court’s resolution of this appeal will be issued on March 10 at 3:00 pm.

The actions of the Public Prosecutor’s Office appear to be part of a strategy to criminalize human rights defenders and community leaders in Guatemala. Keeping Abelino Chub embroiled in a criminal process literally handcuffs his ability to carry out his work in defense of the Q’eqchi people. This despite the high court’s finding Abelino to be completely innocent.

According to Abelino Chub’s defense, “The sentence issued on April 22, 2019 by the High-Risk Court A, is clear and logically reasoned. It is therefore incomprehensible that the Public Ministry alleges in its appeal that the sentence (2016-00328) is not well founded because it didn’t give sufficient evidentiary value to two of the prosecution’s witnesses—the foreman and the manager of the Murciélago farm, allegedly owned by Cobra Investments and CXI, Inc. (companies with a vested interest in the area and plaintiffs in the case). For this reason, it is clear that this continues to be a case of criminalization and a strategy for dispossession of the Q’eqchi lands.”

Abelino was captured by the Guatemalan National Civil Police on February 4, 2017, in the department of Alta Verapaz. The arrest took place in a context of pronounced social conflict provoked by business interests that have systematically stripped the Q’eqchi people of their lands. These companies have produced violence and serious environmental impacts while imposing their economic projects: monoculture plantations, the construction of massive hydroelectric plants, and nickel mining.

These projects have contributed to the increase in poverty and extreme poverty in the region. The Q’eqchi communities that have historically resided in the territory have repeatedly denounced the violence, repression, criminalization and evictions they suffer. However, the Guatemalan justice system has not responded to these complaints. In fact, megaprojects continue to be imposed on community lands, in violation of rights protected by the Constitution of the Republic and international conventions, such as ILO Convention 169, which establishes respect for indigenous lands and the right to prior, free, and informed consultations concerning the use of those lands.

We, the undersigned organizations, denounce the criminalization of defenders and the dispossession of indigenous lands through the improper application of the law against those defending their legitimate and legal rights. The Inter-American Commission on Human Rights (IACHR) has expressed its concern regarding the criminalization of human rights defenders and the malicious use of criminal law to limit the exercise of the defense of human rights.

We urgently call on the Public Prosecutor’s Office to desist from continuing to pursue criminal proceedings which criminalize human rights defenders such as Abelino Chub Caal and violate the rights of indigenous communities, such as Plan Grande de El Estor, Izabal. In addition, we call on you to comply with your obligation to investigate objectively and impartially to stop the forced dispossession of Q’eqchi lands.

Network in Solidarity with the People of Guatemala (NISGUA)