Resistance to the Fenix/CGN Nickel Mine 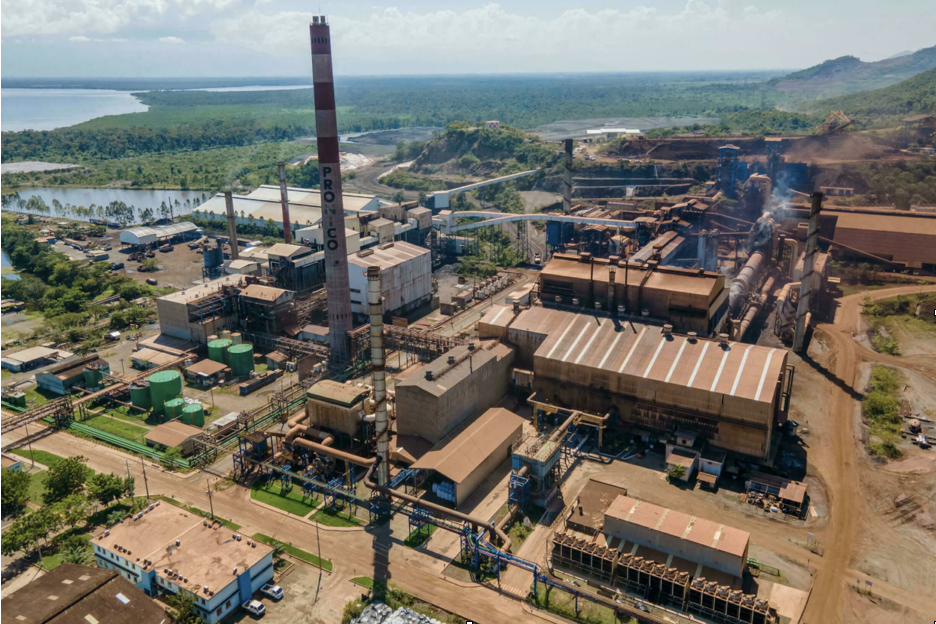 The Fenix Nickel Project includes a ferronickel mine, a power plant, and a processing facility and operates in close proximity to many Mayan Q’eqchi communities. Photo by Carlos Alonzo, AFP.

Despite the fact that Guatemala is party to the International Labor Organization’s Convention No. 169 Concerning Indigenous and Tribal Peoples, the Fenix ferronickel mine in eastern Guatemala continues to operate within and inflict severe damage upon Native lands. The mining operation, currently operated by the Guatemalan Nickel Company (CGN), a subsidiary of the foriegn Solway Investment Group, is situated on Lake Izabal. Lake Izabal is Guatemala’s largest lake and the home to communities of Mayan Q’eqchi’ subsistence fishermen, such as the town of El Estor (France 24). According to residents of El Estor, the mine is responsible for contamination of the lake and other environmental damage, including a decline in population of the fish essential to their livelihoods. Furthermore, the operation of the mine on indigenous lands without consultation of these communities violates ILO Convention No. 169 (Cultural Survival). On June 18, 2020, the Constitutional Court found that the 2006 license under which the mine currently operates failed to comply with this convention and ordered that mining be suspended (Cultural Survival). Locals, recognizing that the mine has continued to operate illegally, used protests and road blockades to object to the illicit destruction, but were met with force from both the Guatemalan government and the CGN (France 24).

The actions of both the Guatemalan government and the Fenix mine operation are in blatant violation of ILO Convention 169. The treaty- one of the only to specifically protect indigenous land rights- specifically states that “the rights of the peoples concerned to the natural resources pertaining to their lands shall be specially safeguarded. These rights include the right of these peoples to participate in the use, management and conservation of these resources…” and “in cases in which the State retains the ownership of mineral or subsurface resources or rights to other resources pertaining to lands, governments shall establish or maintain procedures through which they shall consult these peoples…before undertaking or permitting any programmes for the exploration or exploitation of such resources pertaining to their lands. The peoples concerned shall wherever possible participate in the benefits of such activities, and shall receive fair compensation for any damages which they may sustain as a result of such activities.” The convention, initially proposed in 1989, was ratified by Guatemala in June of 1996 and guarantees the rights of Guatemala’s majority Mayan population with the additional benefit of providing mechanisms by which discourse can occur between indigenous communities and the federal government (International Labor Organization). For failing to consult with Maya Q’eqchi leaders, the original mining license granted to the Fenix mine project was suspended in 2020, and is to remain so until the necessary consultation takes place. Solway has claimed that consultations began on September 28 of 2021. However, these consultations failed to uphold international standards as they did not actually include the community’s self-determined governance structure, the Ancestral Council of Q’eqchi Peoples (Cultural Survival). Rather, the “Council of Maya Q’eqchi Indigenous Communities,” which has previously submitted an amicus curiae brief in favor of the Fenix mine, was appointed to the meeting (Cultural Survival).

The Fenix mine has perpetrated a long, violent history with its indigenous neighbors. Under the leadership of previous owners Canadian company Hudbay Minerals, many Q’eqchi community members were violently evicted from their homes. In 2007, uniformed mine employees gang raped at least eleven women; the case is still pending in Canadian courts (Cultural Survival). When Q’eqchi leaders protested the eviction of their community from their ancestral lands, HudBay security opened fire on protestors, killing community leader Adolfo Ich and paralyzing Germán Chan (Cultural Survival). After the CGN took ownership of the mine in 2011, the legacy of violence did not change. During peaceful demonstrations against the mine’s contamination of the lake in 2017, a member of the Fisherman’s Guild was killed (Cultural Survival). Carlo Ernesto Choc Chub, an independent journalist who was present at the scene, recorded video of the National Police firing at him. He was subsequently harassed with death threats and had six false criminal charges brought against him (Cultural Survival).

In addition to committing physical violence, the Fenix mine has wreaked untold environmental damage on Lake Izabal and the surrounding community. In 2017, a red stain originating from the mine expanded across the surface of the lake to the shores of El Estor (Rivera). The people of El Estor blamed the phenomenon on contamination from the mine, but Solway denied any association with the cause of the pollution (Rivera). After concerns were raised by residents, the government sampled the water but never publicly released the results (Cultural Survival). The Fisherman’s Guild claims that private testing in Germany and Mexico revealed evidence of heavy metal contamination in the water (Cultural Survival). Furthermore, Doctor Coti, the director of the El Estor Public Service Center, has noted an increase in respiratory diseases; environmental sensors have measured dangerously high levels of mining pollutants in the air (Rivera). 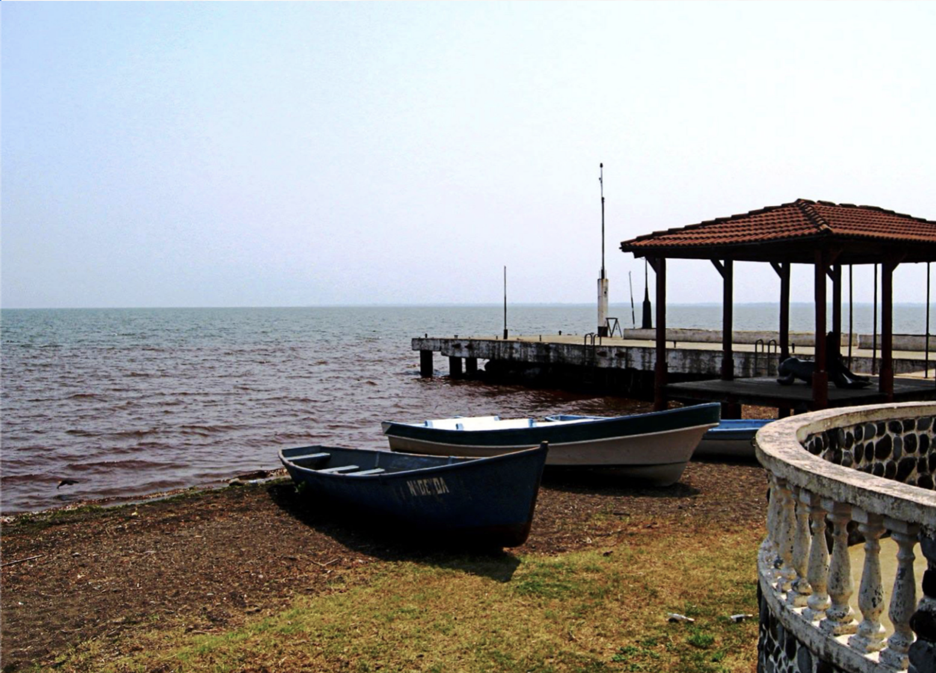 The red water stain, believed by the residents of El Estor to have been caused by heavy metal contamination from the Fenix Nickel Mine, reached the shores of El Estor on April 1, 2017. Lake Izabal, seen here, is an essential source of fresh water and sustains many indigenous subsistence fishermen. Photo by Carlos Ernesto Choc

Most recently, following protests against the suspected illegal operation of the Fenix Nickel Project in October 2021, the president of Guatemala declared martial law in El Estor and enforced it with 1,000 police officers in addition to soldiers, helicopters and naval vessels (France 24). Police raided the homes of community leaders, including Chub, enacted a nightly curfew between the hours of 6 PM and 6 AM, and suspended the right to protest of q’eqchi’ people in the region for a full month (France 24). This state of siege was supported by the U.S. military. Even as it denied the people of El Estor their civil rights, the Guatemalan government proceeded with a farcical consultation process that did not include the autonomously determined representatives of the Mayan Q’eqchi community, the Ancestral Council of Q’eqchi Peoples (Cultural Survival). As a result of this “consultation,” the government has announced that the Fenix Nickel Project, which had been operating in a reduced capacity, will return to full function in January 2022. The mine’s license was declared illegal in 2020 by the Constitutional Court for failing to include key indigenous leaders and organizations when the license was granted in 2006 (Cultural Survival); the current failure of the Guatemalan government and CGN to include those same organizations is still in violation of Convention No. 169.

Police officers march into El Estor after President Alejandro Giammattei declared martial law in response to peaceful protests by Mayan Q’eqchi residents against the operations of the Fenix nickel mine. Photo by Baudilio Choc, Radio Victoria.

According to Solway, the Fenix Project includes the nickel mine itself, a power plant, and the ProNiCo metal processing facility. Solway has mining rights to 36.2 million tons of nickel ore reserves and 70 million additional tons of resources, and in 2019 produced over 1,000 tons of nickel monthly (Solway). Nickel is a resource of rising value, especially given its essential role in the production of electric and hybrid vehicle batteries (Cultural Survival), and the nickel mined at Fenix is some of the most pure in the world (Solway). Although Solway claims to strive to “minimize environmental impact on the neighborhoods surrounding ProNiCo’s production facilities” and invest in “further developing the social infrastructure in local areas of operation,” it is clear that neither Solway nor the Guatemalan government uphold the rights of the Maya Q’eqchi’. Rather, the human rights and ancestral lands of indigenous communities in Guatemala are sacrificed for the riches of nickel mining. The Guatemala Solidarity Project works hard to to support indigenous communities targeted by this illegal mining operation; donate today to aid their efforts. 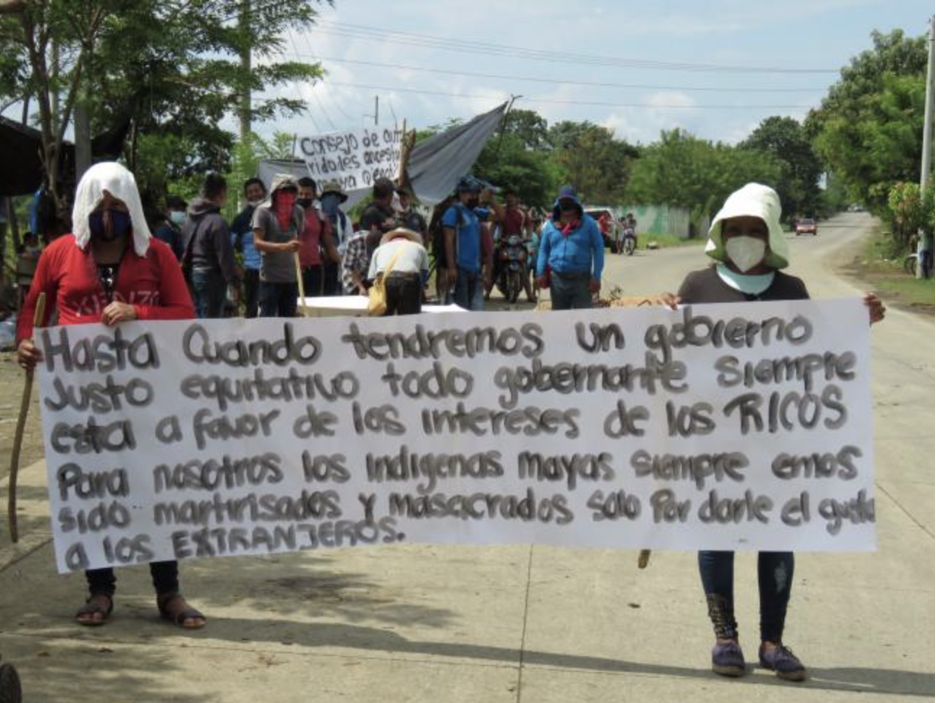 Protestors in El Estor carry a banner that reads: “when will we have a just and equitable government? Every government has always favored the interests of the rich. For us, the indigenous Mayas, we have always been massacred and martyred only to please the foreigners.” Police later used tear gas to put down the protest. Photo by Baudilio Choc for Radio Victoria