The GSP is a small, volunteer-run organization working in solidarity with indigenous and peasant communities and organizations in Guatemala.  We are honored to stand with our partners and are continuously inspired by their courage.  We follow their lead in determining the focus of our work.  We understand that our actions play a very small role, relatively, in their overall work.  We also understand that our work has sometimes made a significant impact on the lives of our partners.  We ask that you stand with our partners by taking action through our website.  This includes but is not limited to donations.  All donations go directly to our partners in Guatemala.

Water in the Valley

One key area that we have been directed to focus more on is water.  In the past quarter we have brought access to clean water to hundreds of people in our partner communities, and have mobilized to support the construction of permanent water deposits.

Access to clean water is something that many of our friends outside of Guatemala may take for granted.  Yet in many of our partner communities lack of access to clean water is causing widespread illness and sometimes death.  Working with the Committee of Peasant Unity, we began visiting communities in northern Guatemala’s Polochic Valley before the government’s massive attack against them in 2011.  Before the attack, the communities were struggling.  Then in March, 2011, over one thousand soldiers and police burned down the homes of thousands of q’eqchi’ peasants and destroyed their subsistence crops.  Violence by the government, paramilitaries and private security continued after these “evictions,” including more arson attacks, assassinations of community leaders, arrests of community leaders on fraudulent charges, grenade attacks against communities from helicopters, and other disgusting forms of repression.

The theft of indigenous lands and destruction of crops meant that our partners had almost no access to food.  Hunger became rampant, and the overwhelming majority of children in these communities suffered from chronic malnutrition.  While lack of food and land was obviously at the center of these problems, our partners told us that lack of access to clean water was what made the hunger extreme.  Community members were not able to process the food that they were eating because of dangerous bacteria and parasites in their water.  They asked us to stand in solidarity with them by purchasing highly effective ecofilters made in Guatemala.

Much greater than the communities’ desire for water filters is their desire for land.  That is why we have supported their demands for recognition of their land rights by marching and attending other protests, gathering petitions, meeting with government officials, bringing community representatives to testify before the Inter American Court of Human Rights in Washington, DC, and in other ways.  We will continue to support these efforts and we will also continue to organize to bring access to clean water to the communities.  Some in the US have labeled our efforts to purchase water filters as a “bandaid” that is unhelpful because it does not address the route causes of injustice in Guatemala.  We are focusing on water filters because this is what our partners have requested.  We also ask you to consider if you were the one who was dying because of lack of access to clean water, would you consider lifesaving clean water to be a bandaid?  We have purchased hundreds of ecofilters and need your support to reach our goal of bringing access to clean water to every family attacked during the March 2011 military offensive. 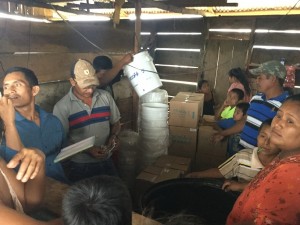 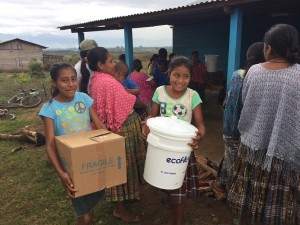 Distribution of over 100 water filters in April.  The GSP

organized a similar distribution during this previous quarter.

Water in the Mountains

South of the Polochic Valley in the mountains of Jalapa, our Xinka sisters and brothers are also requesting our solidarity in their struggle for water.  In this case, they need funding to help build permanent communal water deposits.  These indigenous communities are resisting land theft and environmental destruction caused primarily by foreign mining interests.  These communities tell us that one mine uses as much water in one hour as one family of five uses in 20 years, and they are watching their ecosystems being devastated around them.  They are fighting back by building systems of food production that require minimal environmental impact.  They have secured mechanical water pumps that allow them to irrigate small plots of land without the use of oil or electricity, and they need our support to become even more efficient in their use of water.  With your support and the upcoming GSP benefit concert in Detroit on September 17, we hope to help build multiple communal water deposits by the end of this year. 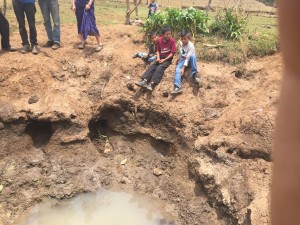 This is a water deposit currently in use in Xalapan, notice

the lack of cement lining and the receding water line.

Burial of Loved Ones

GSP allies played key roles in the exhumation of hundreds of bodies from clandestine graves located in the Coban, Guatemala military base.  Many bodies showed clear signs of torture.  These children and adults were “disappeared” in the 1980s, especially during the time when US Army School of the Americas graduate Edgar Justino Ovalle Maldonado was Operations Commander of the base.  Ovalle Maldonado is now a member of congress and is the founder of Guatemalan President Jimmy Morales’ political party, the National Convergence Front – Nation.  Ovalle Maldonado asked Morales, at the time a famous comedian who had never held political office, to be the party’s candidate as a way to hide the new political party’s real interests.

The exhumed bodies in Coban became key evidence in trials against government officials involved in large scale torture and murder in the 1980s.  Unfortunately Ovalle Maldonado has legal immunity as a member of congress and has not yet been brought to justice.  However in January 18 high-ranking military officials were arrested for crimes against humanity in large part as a result of the exhumations.  Twelve of the 18 officials were graduates of the SOA.

Three of these victims who were buried in recent weeks by their families are Luciano Chen, kidnapped in February 1981 in Chisec, Jacobo Lopez, kidnapped in Tactic in 1981 and Juan Vicente Poou captured in March 1982 in Chicoj Coban. When the families receive their loved ones’ remains, the government provides a coffin and a burial spot, but gives no financial compensation of any kind. So while the family members of those murdered celebrate this partial justice, these families, many of whom live in severe poverty, also face the financial burden of holding a funeral and honoring their dead according to q’eqchi’ traditions. GSP has already received a list of families who will be receiving family members in the coming months, and we are actively seeking funds to help support their efforts.

Many of our partners are threatened by the construction of mega projects.  These are enormous so-called “development” projects financed in large part by multinational financial institutions like the World Bank and the Inter American Development Bank.  The projects involve the theft of indigenous lands, destruction of local ecosystems, and massive profits for Guatemalan and international corporations.  The Guatemalan and US governments excuse their support for such projects by saying they bring development, and in particular jobs, to impoverished communities.  The reality is that only a few people benefit from those jobs, and that is but one tool that the corporations use to divide communities and characterize anyone who questions their behavior as terrorists.

According to international law, indigenous communities must be consulted about such projects that take place on their land.  In Guatemala, indigenous people throughout the country have organized dozens of referendums about various mega projects.  In every instance the people have voted overwhelmingly against the projects because they know they generate enormous profit for a small elite while devastating local populations.

During this previous quarter, the GSP has supported community organizing of referendums in San Carlos Alzatate and Santa Maria Cahabon.  In San Carlos Alzatate, which has already been affected by and witnessed the environmental destruction caused by the Escobal mine in adjacent San Rafael, the indigenous government is organizing against additional mining projects that are destroying their mountains and polluting their water.  We have supported their organizing since our first visit during this past quarter, including with a small amount of funds and the donation of a video camera.

In Santa Maria Cahabon, communities are organizing against hydroelectric dams that would cause significant damage to the Cahabon and Oxec rivers, local communities, and local ecosystems.  Community leaders faced significant violence and intimidation to organize a referendum for July 31 of this year.  Just days before the referendum was to take place, the government announced its cancelation, saying that people in the area had already agreed to the projects.  Their evidence was a petition signed by 50 people in favor of each dam.  Santa Maria Cahabon is an area that includes over 190 communities, and obviously 50 individuals chosen by  the company building the dams do not represent all of these communities.  We will continue to stand with our sisters and brothers in Santa Maria Cahabon who are defending their lives, water and land.

The GSP believes in long term solidarity with our partners, and in the coming months we will continue our work.  We need your support to be successful, including for our monthly commitments to visit and make small financial contributions to political prisoners and to orphans of community leaders.  We hope to continue to give partial support for the burials of people exhumed from clandestine cemeteries.  We will work to provide access to clean water for victims of government violence.  As often happens, we expect to be asked for emergency support for people injured in government and paramilitary attacks.  We will continue to stand in solidarity with our partners in many other ways, and need your support.  Please donate now.  We are a volunteer run organization, so your donation in its entirety will go directly to our partners in Guatemala.  Donations of any size are helpful.  Because we have many monthly commitments, it is especially helpful if you sign up to make a small monthly contribution.

In the coming weeks we will be releasing new videos, as well as sending action alerts about various efforts we are involved in.  To join our action alert email list, please send an email to info@guatemalasolidarityproject.org and write “Add to action alert email list” in the subject line.  It is important that people join the action alert email list so that they can take timely actions in solidarity with our partners.  For example as we were finishing this quarterly update, Esteban Hermelindo Cux, a q’eqchi’ organizer who we have worked closely with for many years, was attacked in his home.  He, his wife and young children, and community leader Fredy Qeb were injured.  They continue to receive threats and at least one other attempted attack.  Action is needed now to pressure the government to arrest those responsible.  Former details and to take action, click here