Alert:  Q’eqchi’ Leader Shot in the Back, 1.000+ Soldiers Attack Community in Wave of Violence Against Indigenous People in Guatemala 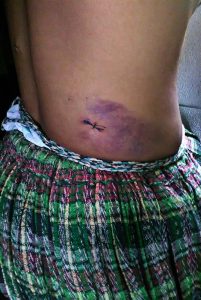 On October 23, community leaders Dominga Caal Col, Mario May Maquin and their two children were fired on with rifles while working in the field where they grow their subsistence crops.  Caal Col was most seriously injured, as picture above.  The GSP and other allies in the area have supported her medical care and we need your donations to continue to provide similar support in our partner communities.

Caal and over 450 families living in the Seamay and Sebax plantations in the municipality of Senahu, Alta Verapaz, in northeastern Guatemala, are organizing to win respect for their legitimate land rights.  They have faced a series of threats and intimidation, culminating in this most recent attack.  They believe the attack was orchestrated by Benjamin Ponce.  Ponce is a wealthy landowner who has been accused of numerous attacks against indigenous communities, as well as drug trafficking and bribery of government officials.  The GSP calls for his immediate arrest.  We fear that if the wealthy Ponce family is not held accountable these attacks will intensify.

Meanwhile in the nearby municipality of El Estor, over 1,500 Guatemalan police and soldiers and multiple helicopters participated in attacks against the communities Esperanza Tunico, Plan Grande and Rio Sumach.  The government labeled the attacks as “evictions.”  The illegal “evictions” violated community members right to food, right to housing and right to land.  Several people were injured, homes were burned to the ground and two community leaders were arrested.  The purpose of the attacks was to clear the land to grow bananas for export. 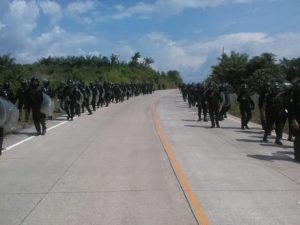 The communities are affiliated with the Committee of Peasant Unity (CUC for its Spanish acronym), one of the country’s largest and oldest indigenous-led grassroots organizations.  CUC leadership is facing escalated repression, including the September 2 attack against national leader Hermelindo Cux at his home and the September 24 arrest of CUC’s South Coast Coordinator Dalila Merida.  Even more worrisome, CUC fears that the government is planning dozens of “evictions” of indigenous communities in the El Estor region in the coming weeks.

Sample message to the Embassy of Guatemala in Washington, DC:

My name is _______________ and I am contacting you regarding escalated violence against indigenous communities in northeast Guatemala.  I know that Benjamin Ponce has been accused of numerous attacks against unarmed indigenous children and adults, including shooting several people in Senahu, Alta Verapaz, on October 23.  I know that Ponce has also been accused of drug trafficking and bribing government officials, and I hope that the Guatemalan government will arrest Ponce instead of choosing corruption.

2) Donate to our partners

Donate to the GSP through our website, GuatemalaSolidarityProject.org  All donations go directly to our partners in Guatemala.  We are in urgent need of funds to support victims of government violence.

3) Join us in Guatemala!

The GSP is organizing a solidarity delegation in January, during which we will build relationships with targeted indigenous communities, leaders and political prisoners.  We also have other opportunities available for activists, organizers, teachers, students and community members who will be in Guatemala at other times.  Please contact us at info@guatemalasolidarityproject.org for more info