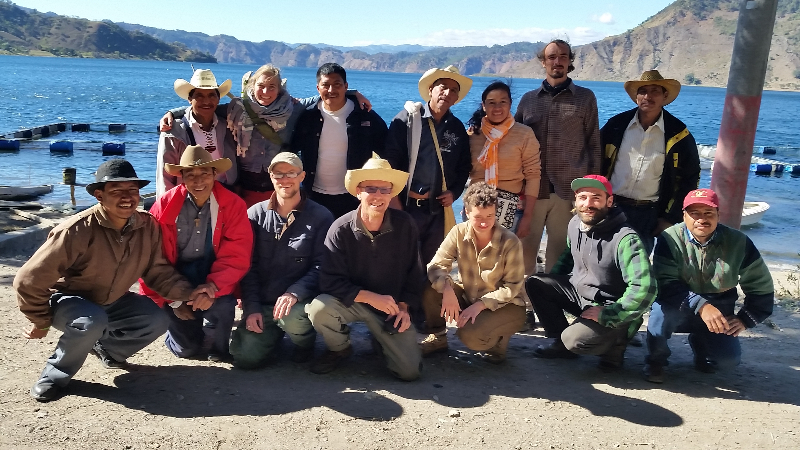 Lake Ayarza, where we joined a celebratory meal after the successful referendum in San Carlos Alzatate

From January 3rd to January 11th, 2017, a group of students, organizers, farmers, and human rights activists from the United States traveled throughout rural Guatemala as part of a delegation organized by the Guatemala Solidarity Project. We were honored and humbled to be invited into communities that continue to resist and organize despite extreme threats to their lives and safety.

We traveled under the principle that solidarity is best created by building long term relationships and listening to the communities most affected by state violence and global capitalism. Three themes emerged from the stories we heard: the role of international and state violence, environmental destruction, and gender-based violence.

The memory of the genocide against indigenous peoples, started and supported by the U.S. through the 1954 coup and subsequent 36 year conflict, was present in every community we visited. Moreover, despite the recent twenty-year anniversary of the Peace Accords, the same conflicts continue against rural indigenous communities. State violence continues to be enacted through evictions, physical and psychological intimidation, and the criminalization and arrest of community leaders.

We heard numerous stories of the theft of natural resources and land from indigenous communities by wealthy landowners and international corporations. These thefts are supported by both national systems as well as international institutions such as the World Bank. At the same time, we heard of the greenwashing of these same crimes, particularly through carbon credit systems that allow the destruction of indigenous food systems and planting of palm or pine plantations in the name of environmental tax credits. Structural poverty and childhood malnutrition also underscored the need for food sovereignty in rural and indigenous areas.

Finally, gender-based violence was a key theme raised by many of the communities we visited. We heard many cases of sexual violence being used to intimidate women and their communities, particularly as retaliation for resistance as well as the systemic use of sexual violence in prisons. More broadly, many communities spoke of the need to center women in structures of resistance and organizing, a challenge given the context of a machismo culture.

The following is a description of the resilience and power of the communities and leaders we met throughout the delegation. It was a privilege to witness, support, and learn from their organizing. We look forward to continuing to support these communities and coordinating international resistance to global militarization and the capitalist exploitation of land and labor.

In Purulja, delegates met with a representative of a widow’s farming group to discuss agroecology and women’s independence. The group, which has rapidly expanded from 20 to 70 women after one year of successful farming, produced enough corn and beans for each of the women to be self-sufficient as well as surplus to sell. In addition to discussing the agroecology of the plot, the meeting focused on the difficultly of navigating patriarchal structures, particularly as widows and unwed women, and the importance of financial and emotional independence.

“You only need a man for a little while, after that you are better off without him.” – Doña Sofia, community leader

The delegation then visited a community of 25 families struggling to retain their right to live on the land they have been working on for generations. Although the community has a right to remain under Guatemalan law (a right recently upheld in court along with the state’s obligation to pay the community for their past unpaid labor), the land owner and local police have been criminalizing and terrorizing the community. Fourteen people currently have arrest warrants, and cannot work or leave their homes for fear of capture, while the entire community has been threatened with physical attacks. Maria Cristina, a woman in the community accused of burning the police station and stealing cows, told delegates of the kidnapping of her son and the terror of her 45 days in jail. The community is also under threat from a reforestation project for carbon credits by the new owner, which threatens their ability to produce food for themselves.

The delegation met with community leaders who are part of a regional movement uniting a number of communities which have for now halted construction of the Santa Rita Dam project that will cause massive environmental harm if the project is carried out. In an area that lost more than 3,000 people during the genocide, corporate interests are enacting renewed violence. In August 2014, 1500 police came to arrest and murder community leaders and burn their houses. Leaders such as Charlie continue to resist, despite the violence against him and his family. The local police, for example, have refused to investigate the case of his daughter’s rape at the hands of hired company workers.

Delegates met Ana Maria in Coban and heard the story of the Saquimo Setana community. After her communities’ land was stolen and their corn and cardamom plants burned, the community was displaced and scattered. Nine families continue to resist. The delegation also visited Ana Maria’s father, Pablo Sacrab, in jail where he has been sentenced to 21 years for stealing a mattress after being targeted as a community leader.

Delegates met with two brothers from the de La Cruz family, one of many families who have been affected by the operation of the Renace Dam projects along Cahoban rive. This family has legitimate claim to their land dating back to 1915. However, a local landownder who claims to own the land through falsified boundaries has already sold it the Renace Dam company. The company has instituted private security on the land, leaving the brothers without a place to live. GSP also visited their other two brothers, Oscar Braulio and Edgar Arnoldo de la Cruz, in jail, where they are serving out a 15 year sentence  on robbery charges as a veil for the land struggle. The brothers’ father was kidnapped in 1982. The brothers continue to fight for land against the corruption in the criminal justice system as well as the national land agencies.

As bodies are exhumed from the Creompaz military mass grave site, GSP is supporting the return of the identified remains to families for dignified burials. Delegates met with Guadalupe, a regional organizer focused on changing the narrative of victim’s groups from the war so they are actively pushing for structural change rather than seen as passive actors. In particular, Guadalupe discussed uniting the victims’ groups to move beyond accepting the dysfunctional reparations program and instead push for structural change.

While traveling through Coban, the delegation heard of two men and two women arrested during an eviction. The four detainees are out on bond and pending hearings, but GSP continues to monitor the cases along with lawyers from UVOC. 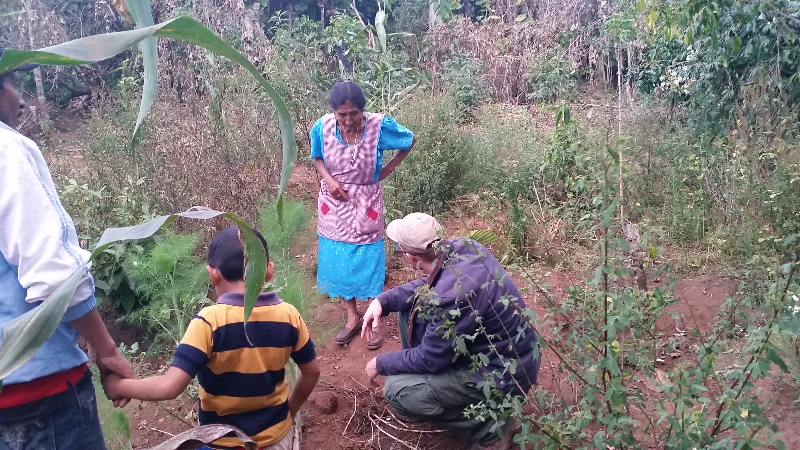 As one of the regions most affected by climate change, much of the delegation’s meeting in Xalapan focused on indigenous food sovereignty and agroecology. The delegation visited two water tanks funded by GSP to assist in irrigation practices, but lack of water for farming remains an issue, as well as lack of production infrastructure for the community’s coffee and medical flower projects. The Xinka community has also been struggling against mining interests in the region, but are maintaining a focus on popular education, youth involvement, and women’s inclusion.

“Without agroecology there is no sovereignty” – Adelso, Xinka leader 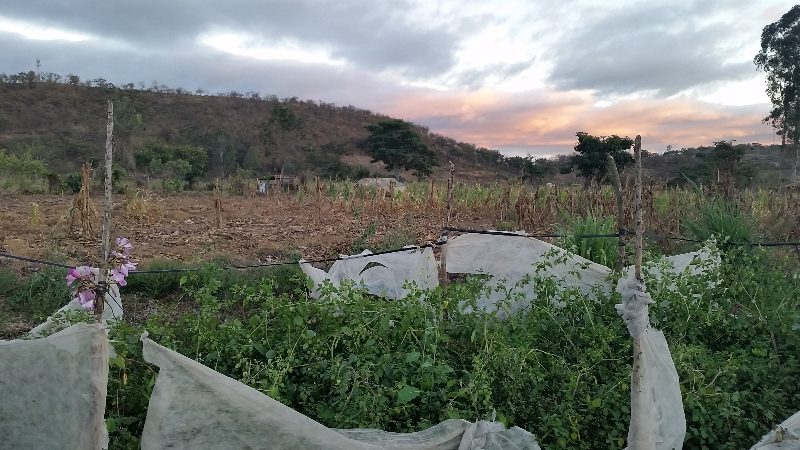 View of garden and corn plants that have been harvested in El Cuje.  In the background are nylon houses and sugarcane.

Delegates visited the worker-reclaimed plantation land of El Cuje, so renamed in honor of the local shade tree to separate it from its previous name used by the former land owners. In 2014, the municipal government of Jalapa recognized the indigenous workers’ claim to the land. Sixty families took the land and transformed it from an industrial tomato plantation to a home for community owned food production. In the last harvest, the community was able to solve 80% of their hunger, but remain struggling to leave poverty, retain the land they already have, and recover the remaining two thirds to which they have a right. Despite having legal right to the land, the community is under extreme threats from organized land owners and narco-traffickers in the area. In addition, there is no power provided to the area and the river is low. Still, the delegation was inspired to see the strength and courage of a community that were once mistreated workers now owning their own plots.

“We know how to fish, we just need someone to let us borrow a net” – Modesto

The delegation celebrated the community’s defeat of chemical mining interests in the area due to a referendum that voted 98% against mining and successfully suspended licenses. The community continues to struggle with overcharged energy prices by ENERGUATE. Additionally, the delegation learned of the Borbolion, the mountain spring at the origin of a river that passes through Guatemala and El Salvador, and the communities’ struggles to retain control over and purity of their water resources.