On November 27th, 98% of the voters of the municipality of San Carlos Alzatate, Jalapa, Guatemala, chose to prohibit any chemical mining activity within their municipal boundaries.  Alzatate is an organized indigenous Xinka-Poqomam community with a history of self-government that goes back to the colonial era.  The Indigenous Community of San Carlos Alzatate continues to exist today alongside the local municipal government.  The indigenous leadership organized a petition to force the municipal mayor to call for a binding referendum according to established Guatemalan law for Municipal referendums.  Thus the will of the people to prevent environmentally destructive mining activities in their area must be certified by the Guatemalan Supreme Court and will have the force of law.

The vote is especially significant as the hugely profitable Escobal silver and gold mine, opened in 2014 by the Canadian company Tahoe Resources, operates literally right next door in the municipality of San Rafael las Flores. The Escobal mine uses the highly contaminating technique of open pit cyanide leach mining (banned in many places worldwide, including the mining-friendly US states of Wyoming and Montana). The profitability of this mine has led to dozens of concessions for exploration in the region, granted by the business-friendly national government with the full cooperation of the mayor of Jalapa, a member of the area’s most powerful political dynasty, the Estrada family. 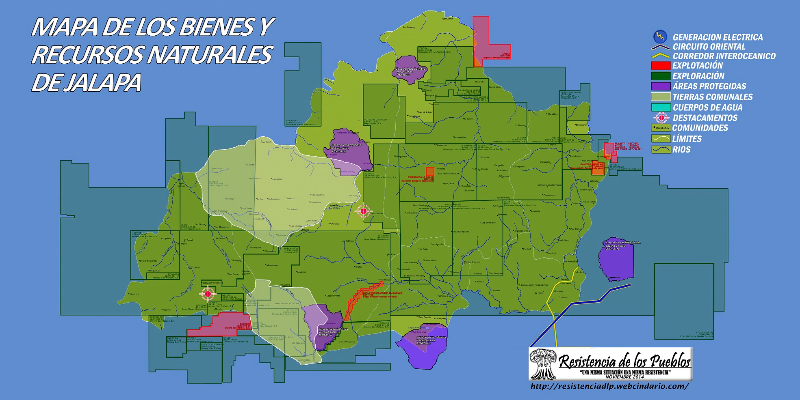 In the map above, Alzatate is located in the southwestern area, the light green is supposedly protected areas due to its indigenous population, the light green area in the north is mountain of Santa Maria Xalapan. The red is active extraction, with the Escobal mine located adjacent to Alzatate in the southwest corner.  The dark green that defines most of the map shows the areas with active mineral resource exploration concession.

In June 2015, a GSP delegation visited Alzatate at the invitation of the commission established by the Indigenous Community to oversee the petition drive.  From July through November, GSP supported this commission’s efforts and also sent a representative as part of a team of election observers from nearby Santa Maria Xalapan.  The election was relatively calm compared to other referendums in which the mining companies openly harassed and intimidated voters. One community member, amidst the sounds of fireworks and cheers while the results were read over loud speakers in the plaza that night, even told us with a grin that he had taken the Q300 ($36) that the mine was offering to buy his vote but voted against the mine anyway.  Over 70% of the registered Alzatate voters participated, with over 6,750 votes cast, demonstrating widespread and organized community resistance.

However, no one can predict what will happen next.  Will companies in the area respect this vote knowing that just in the Escobal concession there are 367.5 million ounces of high quality silver, making it the 3rd largest silver mine in the world?  Will the national government intervene with violence, as they did in Jalapa and San Rafael in 2013-14 by instituting martial law and suspending constitutional rights which resulted in multiple deaths and incarcerations of peaceful protestors?

The elected leadership of the Indigenous Community of Alzatate is already discussing which legal actions to take against the companies already exploring in their area in order to implement the ban on mining activities, taking a brave stand against the inevitable backlash and oppression coming from these companies and their allies in the government.

Sample message to the Embassy of Guatemala in Washington, DC:

My name is _______________ and I am contacting you regarding the November 27 municipal referendum in San Carlos Alzatate, Jalapa, Guatemala, in which 98% of voters rejected chemical mining projects.  I would like to ask the government to immediately recognize the will of the people and take action against any mining companies that violate the referendum or threaten indigenous community leaders in the region.

2) Donate to our partners

3) Join us in Guatemala!

The GSP is organizing a solidarity delegation in January, during which we will build relationships with targeted indigenous communities, leaders and political prisoners.  We also have other opportunities available for activists, organizers, teachers, students and community members who will be in Guatemala at other times.  Please contact us at info@guatemalasolidarityproject.org for more info

News about the referendum in Spanish at: